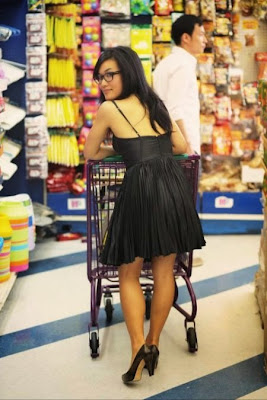 Born in and of Vietnamese and Chinese descent, Wong earned her Bachelor’s degree in Asian American Studies at UCLA. Though she worked as a temp and a receptionist briefly, she’s managed to make stand-up her full-time job for the past decade. Wong has performed on “The Tonight Show with Jay Leno,” “Chelsea Lately,” Dave Attell’s “Comedy Underground,” and “Late Night with Seth Meyers,” among many other television programs. Wong is also a writer for ABC’s “Fresh Off the Boat.”

Newly married, 33-year-old Wong may be taming down her act in the future—but hopefully not before her upcoming run at Acme in .

Q: How did you know that stand-up comedy was what you were meant to do?

A: I was in theater group that Randall Park had founded. I liked that improv and sketch comedy were collaborative, but you really depended on other people and a stage to perform. With stand-up comedy, I liked that you had no one else to blame and depend on.

Q: You also do a lot of comedy onscreen. Do you prefer that to stand-up?

A: Stand-up will always be my favorite and the most important thing that I do. I view everything else as free money.

Q: How is your sense of humor different in your 30s than it was in your 20s?

A: Before I used to talk about a lot more about what it was like to have sex dating, and now I’m beginning to want to talk about what it’s like to have sex when you’re married. The jokes before were about how giving blow-jobs was such a chore and now that you’re married you don’t give a full-on blow-job anymore because you’re married. It’s over. You don’t need to do that anymore! We’re trying to get pregnant and we don’t really have sex for pleasure. It’s extremely clinical.

Q: You’ve often joked about how “trapping a man” is an alternative to having a career and that it gives women the opportunity to relax and hang out at Whole Foods in the middle of the day. Do you really believe marriage is like that?

A: I’ve fantasized about it. A lot of women do stand-up as a gateway into acting but I love stand-up and to be a good stand-up, you have to go on the road a lot. It means going to places in where they’ve never seen a Vietnamese person in their life. Sometimes you’re performing Tuesday through Sunday. And it’s scary! After late shows, you have to walk back to the hotel by yourself. It’s not that glamorous.

So I look at those women who get to do hobbies, watch TV, do yoga, and I’m like, “Damn! That would be nice!” It would take the pressure off if I didn’t have to do stand-up to survive. Ultimately, I’ll probably never stop doing stand-up, but I do fantasize about being a trophy wife—though I joke that I’m more of a commemorative plaque.

Q: Has being sexually explicit in your comedy had any negative consequences?

A: I once dated this guy who wrote me this really crass e-mail after I broke up with him. He said he didn’t want to be friends because it made his dick hurt because he wanted to sleep with me. I refused to talk to him afterwards and he was so, “Oh, but I thought from your onstage persona that you were open to anything.” And I was like, “I’m still a woman. You can’t talk to me like that.” That was the only time I felt like someone misinterpreted my onstage persona. You can’t just be crass without being witty. Angry crass is horrible.

Otherwise, it probably has prevented me from being on late-night TV more because it’s hard for me to come up with five clean minutes. But it’s beginning to change. I’m moving in a different direction now that I’m married and trying to have kids.

Q: Do you feel that male comedians have more leeway in terms of what they can talk about in their acts?

A: When you are a female and a minority in comedy, people see both of those things and think you use those things as a crutch. I would never do an accent of my mom, because my mom doesn’t have an accent. But people will automatically be like, “You’re such a Margaret Cho.” They just assume. That’s challenging sometimes.

Q: What would you be if you weren’t a stand-up comic?

A: A trophy wife who’s also a Zumba instructor.

Originally published on Vita.mn in April 2015.