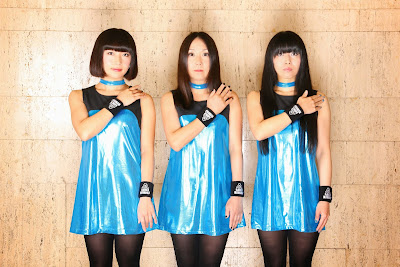 Since Shonen Knife’s first rehearsal in 1981, the Japanese punk trio has endured decades of recording and touring the globe. While the threesome’s lineup has changed over the years, its fun, danceable brand of songs about food (“Banana Chips,” “Broccoli Man”) and cats (“Giant Kitty”) garnered the band a cult following and heavyweight fans like Kurt Cobain of Nirvana and Thurston Moore of Sonic Youth.

Known for its energetic live show, coordinating outfits, and upbeat attitude, Shonen Knife is a shameless aural indulgence. The band’s latest release, this year’s “Overdrive,” was inspired less by punk and more by ‘70s rock but still contains the edible and animal influences that longtime listeners love.

Naoko Yamano, the only remaining member from the original Shonen Knife lineup, spoke to Vita.mn in anticipation of the band’s 1000th performance at the Turf Club.

Q: Shonen Knife has been around for over 30 years. How have you and the music changed over time?

A: I’ve never changed. My ability to play the guitar has progressed. My skill of writing songs has progressed, too. But my spirit, my rogue spirit, is forever the same. I never look back. I just look forward. I can’t believe that so many years have passed.

Q: Did you ever desire to do a solo project?

A: If I had enough time, I’d like to try to do a solo project, but I’m very busy with Shonen Knife and my own life so I can’t do that. Also, I’m very lazy. Shonen Knife is enough.

Q: What kind of music inspires you?

A: At the beginning, I was inspired by late ‘70s pop-punk music like the Ramones or the Buzzcocks, but I like to listen to various music, even death metal or disco or classical music. In the past five, six years, I like to listen to ‘70s American rock or British hard rock like Judas Priest or Black Sabbath. I’m very flexible.

Q: A lot of your songs are about food. What is it about food that you find so fascinating?

A: I just love to eat. I especially like sweets—chocolate or cake. I’m so ashamed to write about love and I think songs about political things are sad or hard. I like to make people happy through our music so I pick happy topics like food or animals.

Q: You seem to have an optimistic outlook. Where does that come from?

A: If I pick one city, the other cities will get sad, so I can’t choose.

Q: Okay, then tell me what your favorite thing about living in is.

A: Living in , we have tons of delicious food. Japanese food is very healthy and tasty, very light and not so greasy. Also, living in , the public transportation is very convenient. We have the subway, and I can go downtown very easily.

Q: Tell me about the band’s fashion sense. Who decides on the outfits?

A: We always wear matching costumes and our costumes are inspired by ‘60s and ‘70s designers. My younger sister, Atsuko, our original drummer, was a professional clothing designer and designed our stage costumes and made them by herself.

Q: If you hadn’t been a musician, what career would you have pursued?

A: Pro tennis player. [Laughs.] I like to watch tennis. I’m watching the U.S. Open.

Q: What do you foresee as the future of the band? Will you still be playing 30 years from now?


A: As long as I’m alive. I don’t know how long I can keep my health or go abroad but I am fine so far. I cannot imagine but I’d like to keep playing, keep on rocking, as long as I can.

Originally published on Vita.mn in Sept. 2014.