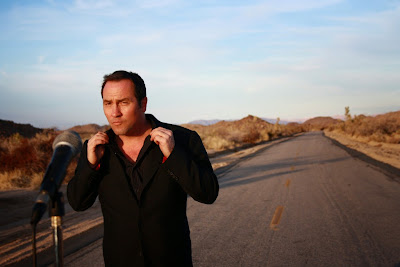 There’s never been a better time to be a stand-up comedian. Or so says Tom Rhodes. The 47-year-old funny man has spent three decades of his life making people laugh. His acerbic wit and dark humor have landed him television gigs as a late-night talk show host in as well as his own (short-lived) NBC series. A globetrotter at heart, Rhodes has no formal address and lives a nomadic existence. This year alone he’ll hit , , , , , and . In addition to frequent stand-up performances, he produces a podcast, Tom Rhodes Radio.

Q: You’re one of the few comedians that travel all over the world. How does travel inform your comedy?

A: I was maced the first time I was in . That’s a lively story. I have a lot of jokes and stories about different countries and I always love asking the audience if there’s anyone from a different country. I usually don’t get stumped, but I was in a couple nights ago and I had someone from and . I had nothing for them.

Q: Do you find that some of your jokes are universal?

A: Absolutely. When you go to different countries, you find out what’s universally funny and what’s regional and you have to adjust pretty quickly. Everybody gets the same news now from technology and everybody gets American television and movies, so as Americans we have that advantage. Pain, suffering, heartbreak—things like that people can relate to everywhere.

Q: You have a video on your YouTube channel featuring a recent exchange with a heckler [who almost came to blows with ]. How has your approach to hecklers developed over the years?

A: When I walk onstage, everyone loses rank and title. I’m the sheriff. This guy had a UFC fighter build with very predictable tattoos and a shirt that was open down to his navel. He wanted to high-five and interrupt everything and finally, I just got tired of it. I’ve got a lot of heckler comeback lines. In my early years, my fragile house of cards would easily get blown over. You have some pea-brained drunk steal your thunder at a show enough times and you’re going to go home and lie in bed and think of the most evil insults possible so you don’t have that happen again. I have a lot of arrows in my quiver now. I never look for it. I never make fun of the audience. I don’t pick on people. I hate that kind of comedy, personally. But if somebody is an idiot and keeps interrupting the show, I take great pleasure in humiliating them.

Q: Are there things you won’t joke about?

A: Absolutely. Last year there was a big controversy about rape jokes and a lot of comedians were saying, “Comedians should be allowed to speak about anything,” and I agree with that, but I don’t find anything funny whatsoever about rape. There are a lot of topics I wouldn’t make fun of because I want to entertain people. I like shock humor, but I don’t talk about certain topics because why ruin someone’s evening?

Q: What do you consider selling out?

A: Not being true to yourself.

A: No, not for the right thing. I’m a snob about certain things. I travel constantly, so luggage is important to me. If Travelpro Luggage asked me to endorse, I would be happy. I’m a faithful consumer.

Q: You swore off alcohol at the beginning of the year. What prompted that?

A: Wow! Have you been talking to my mom? You know everything! How do you know that?

Q: From your interview with London Real. You mentioned that’s how you got the scar above your eye.

A: Yeah, I had an unfortunate incident. Actually, it’s kind of a blessing. I blacked out for a second and fell off of a stool and got six stitches in my forehead. I took that as a wake-up call. I just stopped drinking. I’m enjoying it. Like that incident with the heckler, I was completely clear-headed and in control. I felt like a matador, like I was standing in front of an angry bull. There’s certain things that if you say to another human being, you expect them to punch you in the face. Maybe not Minnesotans, ‘cause you’re so nice. [Laughs.] I love having total clarity and total recall while I’m onstage. I’m on a whole different level since I stopped drinking.

Q: Tell me about your friendship with the late Minnesotan comic Mitch Hedberg [who died from a drug overdose in 2005].

A: Mitch was one of my best friends. Like most everyone, I was completely devastated when he died. He was a really sweet, brilliant human being. We worked together a lot. I partied with him a lot. There was a period I was living in and he was living at the and we had some very wild, wonderful times together.

Q: Did his death change your views on drug use at all?

A: It’s kind of a personal question. Hmm… [Pause.] It was…yeah…hmm… [Pause.] I love the guy. I felt like a big brother to him in certain ways. It’s unfortunate.

Q: You’ve said “Comedy was invented for the ugly and the damaged.” Where did that philosophy come from?

A: The scar on my forehead. [Laughs.] I think comedy has been hijacked in certain ways by young, good-looking suburban kids without much life experience. Comedy wasn’t meant for the people who got everything in life. Comedy was meant for the outsiders.

Q: Who’s on your wish list to interview for your podcast?

A: There’s loads of people. It’s mostly comedians talking about comedy, but the unique thing about mine is that I’m traveling all over the world. I got to interview [tech entrepreneur] Kim Dotcom. The guy’s like a vaudeville and he’s got his own private army of men in black with machine guns around his property. I got to go talk to him and ask him all about the government persecution and us trying to extradite the guy. It was great. I have it in my mind now that anything’s possible for interviewing people.

I would love to interview Prince. I love that guy. I was playing in at least 15 years ago and someone who worked for him was a fan of mine and I got invited to . He did these summer jams, like every Saturday night where started playing at 3 in the morning and ended at 6 or 7 in the morning and there were only 50 people walking around. I love the fact that he’s still a Minnesotan. I think he’s one of the coolest performers of all time.