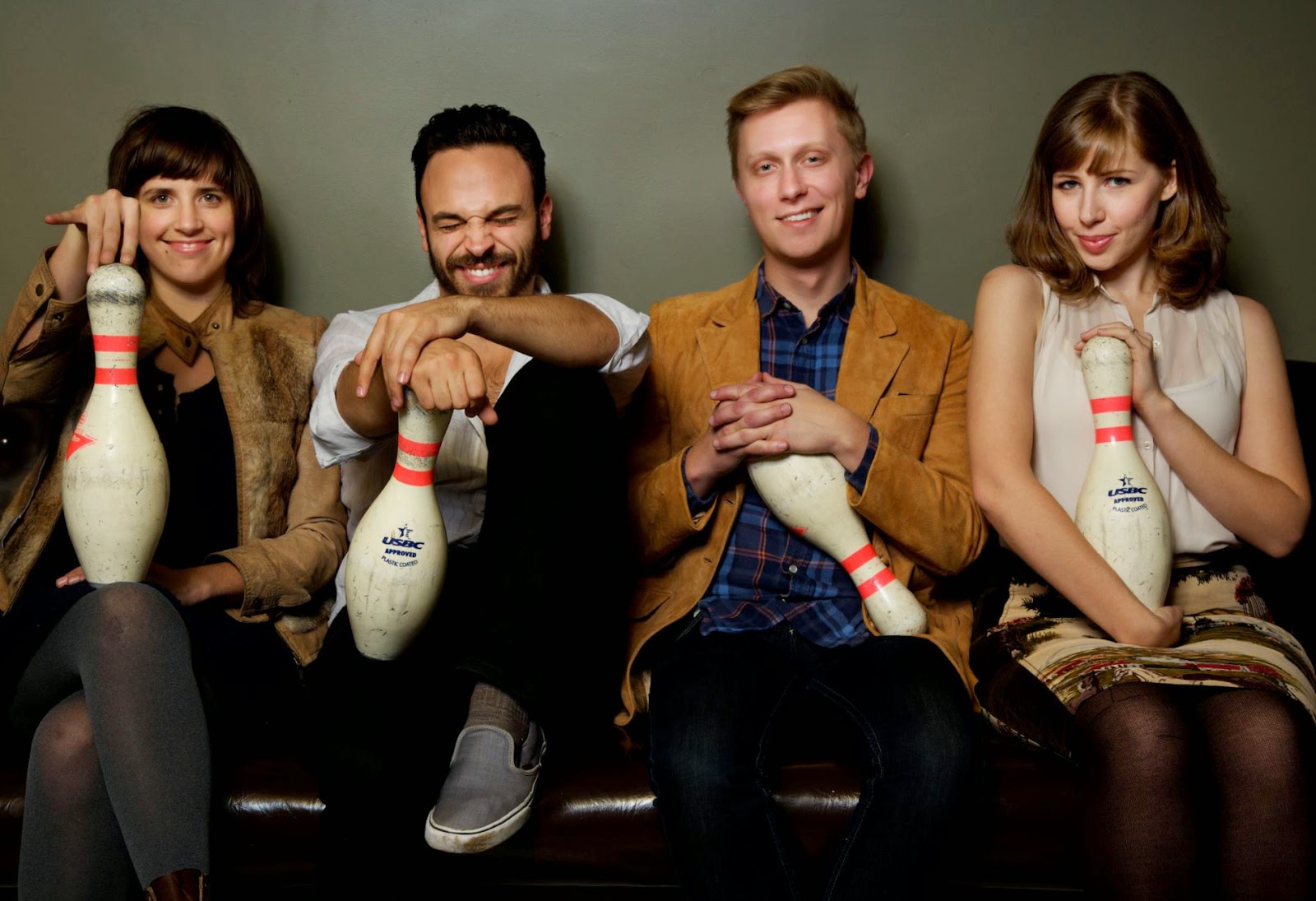 Though Lake Street Dive might appear to be an overnight success story—thanks to a YouTube video of their “I Want You Back” cover that went viral in 2013—the quartet is actually on the cusp of celebrating their ten year “bandiversary.”

Hailing from disparate hometowns (Lead vocalist Rachael Price from the area, trumpet and guitar player Mike Olson from , stand-up bassist Bridget Kearney from , and drummer Mike Calabrese from ), the foursome converged as students at the New England Conservatory in .

Lake Street Dive released their self-titled debut in 2011 and an EP, “Fun Machine,” in 2012, both showcasing a strange brew of alt-country and jazz music. Their latest album, “Bad Self Portraits,” ventures into pop rock territory, a transformation that clearly appeals to the masses as well as the critics, garnering gushing reviews from Rolling Stone, The New Yorker, and Hollywood Reporter.

Olson spoke to Vita.mn from the band’s tour van.

Q: All the band members are from different states. How does that inform the band, professionally or personally?

A: I don’t know that it’s informed our songwriting. We were studying jazz, which is a universal language, but we all grew up listening to ‘60s music, Motown, and British invasion stuff. It does influence our personalities. Mike [Calabrese] has that East Coast edge. Rachael has that Southern hospitality. Bridget is your classic Midwesterner. Somehow we make it work.

Q: Did you have a particular Lake Street Dive in mind when you named the band?

A: It was supposed to evoke an archetypal Minneapolis dive bar, though I will say of the bars I’m familiar with in town—which are not many, because I moved away before college and I wasn’t in too many bars at the age of 17—the Bryant Lake Bowl is a favorite of mine.

Q: Dive seems to have genre-hopped. Why is that?

A: We’ve always wanted to be a rock band. Or a pop band. But we still turn around and see a record review calling us a folk grass jam band. We’ve evolved not out of a desire to fit a certain genre, but because we’ve discovered what we enjoy playing coupled with a realization that our early jazz-influenced music wasn’t good.

Q: You recently appeared on The Colbert Report. Walk us through that experience.

A: I was so nervous it was sort of a blur. We rolled up in front of the studio that morning and Stephen Colbert leaned out of the window and waved his arms at us. We were dumbfounded. He came backstage and talked to us and took selfies with his phone. The crew on that show was so amazingly kind. Some lady from the wardrobe department cleaned my Chuck Taylors for me so they didn’t look crappy. The studio audience was really nice. I think we’re going to be spoiled forever if we were to do TV ever again. It’s probably never going to be as welcoming and warm as Colbert was.

Q: The title of your latest album is a reference to social media and cell phones. What about that theme intrigued you?

A: I think Bridget—the songwriter of that song—was perversely fascinated by the ridiculous trend of selfies. Bridget is often looking towards things off the beaten path as inspiration for her songs. She definitely likes looking at selfies and taking them—she’s actually taking one right now! [Laughs.]

Q: You recorded “Bad Self Portraits” in a farmhouse. Why was that the ideal venue?

A: It was really rad. There were only a couple of rooms that were overhauled to be acoustically treated. The rest of the house, where we did most of our recording, like the attic or the bathroom, was rustic. There was no cell phone reception and no internet. It allowed us to be hyper-focused on doing two things: sleeping and recording. That environment gave us a different kind of work ethic and focus than we’d had. When we were done and left the studio, everyone turned on their phones. While we’d been isolated, our YouTube video went viral. We got out of this hyper-focused atmosphere and realized the world was going on without us, in this amazing way that we wouldn’t have been able to manufacture if we’d been at our computers.

Q: Has the attention changed the experience of making music or performing for you?

A: Not yet, I don’t think, because we made the last record in such an un-self-conscious way. We were making a record not because the fans or our record label demanded it or whatever bullshit comes out of bands being more exposed. We were just making it because we had the tunes and it was the right time. The increased exposure has made performing more fun in a lot of ways because we’re playing for larger, more enthusiastic crowds. This record has reached so many more people than anything we have done in the past. Trying to follow that up with a new record that we’re proud of…I don’t know how that’s going to go.

Q: Rumor has it you used to wear matching sweater vests onstage. Why did that fall by the wayside?

A: That changed because sweater vests are frumpy. We didn’t know much about how to be a band back then. Our rehearsals were an excuse to get together and eat chips. Our first records were done without direction or a theme. Our shows were booked based on where we didn’t have to pay for a hotel. We thought we should have a band uniform, which were sweater vests, which does not instill in the audience the vision of a savvy pop band that’s writing sexy jams. We looked like librarians and math teachers. Over time, we’ve thought a lot more critically about the kind of band we want to be. I’d be lying if I said we didn’t want to be a little more hip. I mean, who doesn’t?

Originally published on Vita.mn in March 2014.