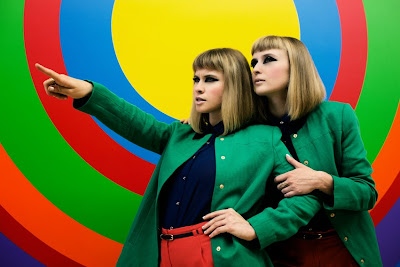 Lucius became a band backwards. Though they just released their debut album, “Wildewoman,” in October, frontwomen Holly Laessig and Jess Wolfe have been making music together for almost a decade. After recording several songs with engineer and producer Dan Molad, they added him to the lineup. Multi-instrumentalists Peter Lalish and Andrew Burri followed shortly thereafter.

Soon Lucius was re-recording all the tracks Laessig and Wolfe had previously laid down. The quintet finally found their sound, signed to Mom + Pop records, and embarked on an ambitious tour. With a live show that’s as riveting for the ears as it is for the eyes, Lucius’ feisty power pop has garnered critical acclaim from the likes of Billboard, Paste, and Spin. Rolling Stone says Lucius is “the best band you may not have heard yet.”

Vita.mn spoke to Laessig in anticipation of Lucius’ sold-out show at the .

Q: Where are you right now?

A: We are at the airport. We just got in the van. The guys drove in yesterday from…where were we? [to bandmate] Where were we? . Jess and I were shooting a music video and we had a few scenes to do so we flew to meet them here.

Q: How did you and Jess meet and begin making music together?

A: We met about 11 years ago, in , at school [Berklee College of Music]. Two years later, we were at a party and got to talking about music and our influences and Jess said, “We should do a cover show together!” She’s a very take-the-bull-by-the-horns lady. It was going to be a White album cover show. We arranged “Happiness is a Warm Gun” and recorded it and we were trying to figure out parts: Should we trade off? Should we sing in harmonies? By accident, we started singing in unison and thought, “That would be really cool if we could do it well!” We never did the cover show or any of those other songs. We started working on original material instead.

Q: How did the band’s sound change after you added the guys?

A: When we started, we had a rotating cast of musicians. Then we moved to , and we got involved in the singer-songwriter scene. Open mics are fun, but they’re kind of boring. We’d go to rock shows where people were dancing onstage and everyone’s having fun and we wanted to do that for people. So we had that in mind but didn’t know how to go about it. Then we met Danny, and he agreed to collaborate with us as long as we were open to anything. We started recording, things were going well, and Danny brought Pete, who he a long-term musical relationship with, on board. About a year after that Pete was working on a record for Annie and the Beekeepers and met Andy. We just fell in love with his playing and his voice, so we brought him on board. It was weird because we formed the band through the recording process. It grew organically.

Q: You’ve said that the band made a “conscious effort not to put out an album until you were ready.” How did you know when you were ready?

A: We had recorded all the songs, then had to figure out how to play it live. As we were tweaking things to make it more effective for a live performance, we would grow married to those ideas and then want to go back and re-record them that way. It felt like a journey for a long time. It took three years to record it all.

Q: What characteristics define a wildewoman?

A: A wildewoman is a strong, open-minded female but also an individual who does her own thing and is not afraid to be vulnerable.

Q: Do you have any time while you’re on the road to work on material for your next album?

A: We had two days a month ago. It’s really hard when we do a radio show in the morning, then drive, then play a show, and it’s been like that every day. It’s something that’s starting to creep back up in my mind and everyone else’s. We need to feed that creative monster again soon.

Q: How did the band’s fashion sense evolve?

A: Jess and I had always coordinated from the beginning. We were inspired by striking performers like David Bowie, Bjork, Prince—people who have definite styles and eccentricities. That was always something we kept in mind. We wanted to be on a different plane when we went onstage and create a different world for the audience and for ourselves so we could get into it. The matching came along maybe three or four years ago. The sound and our stage set-up are so symmetrical. We wanted to make the visual represent the audio.

A: The driver gets to pick the music. That’s the only definitive rule I can think of. Everything else is negotiable.