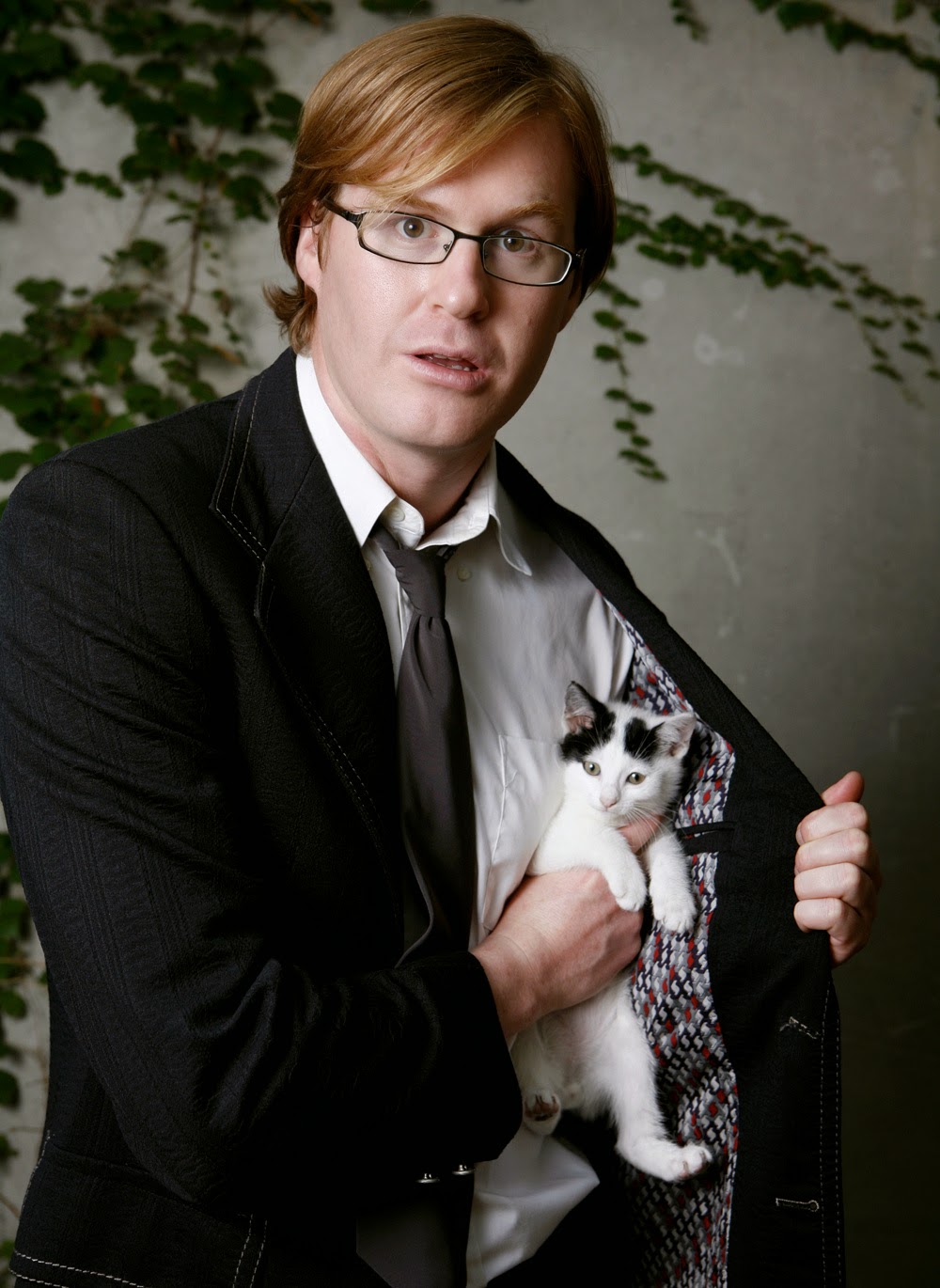 Kurt Braunohler is a rare breed of comic. In addition to the foul-mouthed observational stand-up you’d expect from a 30-something dude from New Jersey, Braunohler gets his jollies from wacky stunts like hitting up drugstores for greeting cards, writing brutally honest inscriptions, and returning them to the racks. He also enjoys signing books such as “50 Shades of Gray” as the author (albeit wittier) and putting them back on the shelves in bookstores. Braunohler describes this style of comedy as “inserting stupid, absurd moments into strangers’ lives” to make the world a better place. “

Braunohler grew up as the only child of a single mother who breast fed him until he was three years old. His father had eight other children. As an adult, he attended , but his career as a comic truly gained momentum after moving to . He became known as a “guerrilla artist” and an urban experimentalist. One of his most memorable creations was a half-chicken, half-penguin costume that Braunohler wore around NYC. He would stage fights in the streets with his friend, Matt Murphy, who was dressed in a half-chicken, half-skunk costume.

With comedic partner Kristen Schaal, Braunohler co-created the variety show “Hot Tub” in 2005. The two co-hosted the show for 7 years in New York City before moving to L.A., where Braunohler continues to shake people out of their stupors by, say, posting a sign that says “No, you stop!” beneath a real stop sign.

In addition to accolades like being named a “Comic to Watch” by Comedy Central and Variety Magazine, Braunohler has performed at Bonnaroo, SXSW, Just for Laughs, and .

Braunohler, who has a five-night stand Acme Comedy Club starting on Feb. 18, comes off as somewhat guarded on the phone. There’s no emphatic cursing and the only joke he makes is: “When I was 8, I killed this kid…but in a really funny way.” When asked why comics’ personalities vary from onstage to off, he responds, “Onstage is a show. You’re presenting a version of yourself, and it’s a heightened, specific version of yourself. In conversation, you’re the actual human. My stand-up persona is very similar to who I am, but it doesn’t incorporate all the aspects of my life.”

On the list of unmentionables are philosophy, surfing, and romantic advice. Braunohler does, however, make material out of old relationships. In 2012, Braunohler appeared on “This American Life” to discuss a “rumspringa” he and a former girlfriend declared after 13 years together. Their 30-day sexperiment, during which both parties had permission to sleep with other people, turned out to be the beginning of the end of their relationship.

“We didn’t know how to break up,” Braunohler says. “We had to do it in a real weird way.”

Braunohler used that experience to fuel an hour-long act for a year. It’s also the basis of a screenplay he’s writing.

“I think ladies like a funny guy,” Braunohler says.

Indeed, Braunohler admits he gets propositioned by the occasional drunk female after shows, though he doesn’t consider that creepy.

“I’m lucky that way,” he says. “I think women get the brunt of that and it’s unfair. A female comic at my level gets creepy shit constantly whereas I get relatively zero creepy shit.”

Braunohler is in a relationship now and isn’t tempted by adoring fans. “I get my action at home!” he insists.
Braunohler recorded his debut comedy album “How Do I Land?” live in and clubs and released it in 2013 on indie label Kill Rock Stars. The cover art was funded by a Kickstarter campaign in which Braunohler raised over $6,800 to hire a pilot to write the title of the album in the air. Videos of the skywriting went viral.

Braunohler is currently trying to sell a TV show pilot and does a weekly podcast called “The K Ohle with Kurt Braunohler” which airs on the Nerdist Network. The “Get Lost” segment is one of the highlights of the podcast for him because it “satisfies that geographical desire.” He also prefers to walk to the venue pre-performance when possible.

Of his most recent performances, in , Braunohler said he didn’t have to tweak his act too much to accommodate the Brits.


“There’s stuff that’s different based on cultural norms,” he says. “I figure out how to make the jokes work or take them out. You just kinda gotta get the feel for it.”