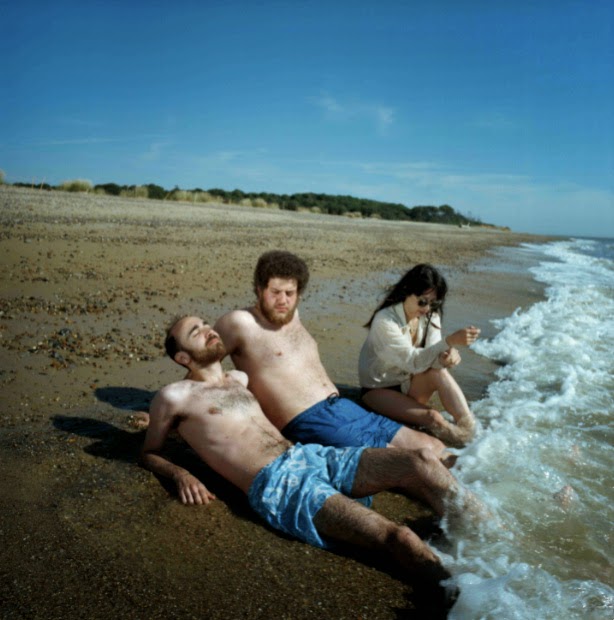 London-based indie rock band Yuck is anything but bitter despite being abandoned by their frontman, Daniel Blumberg in early 2013. Guitarist Max Bloom took over, penning songs and laying down tracks with drummer Jonny Rogoff and bassist Mariko Doi at Dreamland Recording Studios. Thanks to the guidance of producer Chris Coady (who worked his magic with the Smith Westerns), the trio released “Glow and Behold” in September 2013 on Fat Possum Records. Previously compared to Sonic Youth and Dinosaur Jr. after the release of their self-titled debut in 2011, Yuck’s new sound is more polished, lush, and appealing to a totally different palette than their original incarnation.

Bloom skyped with Vita.mn from a London Starbucks.

Q: When did you first get into music and how did that path eventually lead to Yuck?

A: I’ve been playing music as long as I can remember. When I was 16, I started a band [Cajun Dance Party] with some friends from school, and that was with our old singer Daniel. We got serious at quite a young age. We released an album and that band broke up when we were 18 or 19 because some of the other members wanted to go to University. Then me and Daniel spent a year hanging around and writing songs. We got stuff going with Yuck and got Jonny and Mariko involved. Jonny dropped out of school and came over and stayed with me in my parents’ house for a year. It was so risky, but luckily it all worked out.

Q: Were you prepared to take over the role of frontman after Daniel left the band or was it something you had to grow into?

A: I was prepared, for sure, but you can never really be fully prepared because it was something I had never done before. It didn’t take that long to get into it. It took me, like, three shows to relax and have a good time. At this point it feels very normal and very fun. I don’t feel like the frontman. I see Jonny and Mariko sharing an equal role with me. When I sing, I don’t think people are looking at me, they’re far more likely looking at Mariko or at Johnny with his huge hair. I feel like I’m the least recognizable member, if anything.

Q: How has Yuck’s sound evolved since the first album?

A: The first album was completely born out of an obsession and created with love during an intense period. With this album, I didn’t want to go back and repeat myself. I wanted to do something completely different and get out of my comfort zone. The first album was like a patchwork of songs that we wrote, arranged into an album. It was kind of like a compilation or a greatest hits vibe. The second album is more consistent and you can listen to it start to finish. The songs were more personal and it was a more solitary experience making it. As people, we’ve matured and our tastes changed and that obviously played a big part in it.

Q: You’ve been touring with the likes of the Pixies and Dinosaur Jr. Have those bands given you any professional advice?

A: We didn’t get to know Frank Black [of the Pixies] that well, because it was only a week’s worth of gigs, but we were about to go on stage in Prague and he was like, “Okay, guys, let me give you a little piece of advice.” And we were all like, “Yeah, yeah, yeah! Go on!” We were very eager to hear his advice. And then he was like, “Yeah, I don’t have any advice.” It was quite funny. I would absolutely love for them to say something meaningful to me, but I think they see giving advice as patronizing.

Q: How do the American and British music industries differ?

A: In the , it’s very small. There aren’t that many people that actually work in the music industry nowadays. It’s very fickle. Labels change names. The head of the company changes every few months. You can’t get to know anyone. In , there are different levels of success that you can happily exist on. In , you can be a not-very-well-known band and still sell out shows. If you’re in the , there’s not that many levels you can exist on. It’s either big theaters and arenas or you’re underground, touring the country in a car, playing rubbish venues. There’s not much in between.

Q: How do you keep touring from becoming tedious?

A: I’ve tried so many things to stop touring from being tedious, but nothing seems to work. I’ve tried getting drunk every night. I’ve tried going to the gym every day and having a healthy diet. Mostly it’s just watching TV like a pastime with a box set like “The Wire” or “Mad Men.” It’s about being as relaxed as possible at all times. You’re in danger of going insane if you’re not careful. You’ll forget what day of the week it is and before you know it, two months have gone by. You have to learn how to tour and keep a level head. It’s a practice. It’s an art, really.

Originally published on Vita.mn in Jan. 2014.