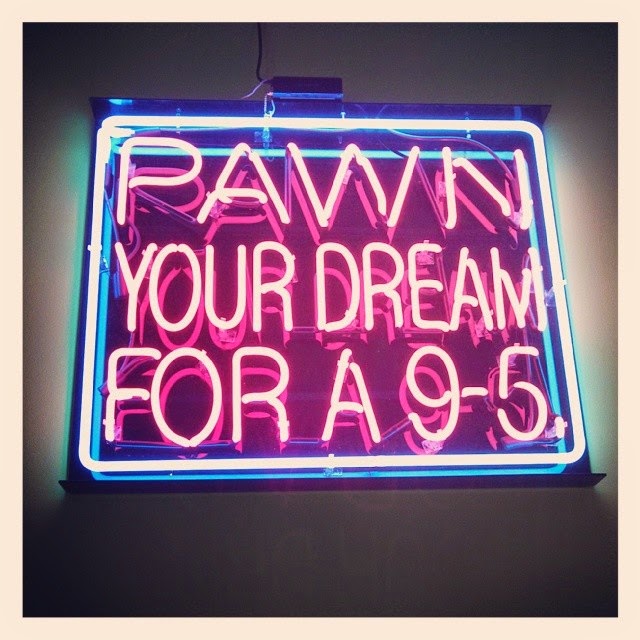 Public Functionary opened its third—and final—installation of the year on Friday. “Buy Now Cry Later” by Patrick Martinez is a solo show that examines the contemporary crisis of mainstream consumerism. An L.A. born and bred artist who is of Filipino, Mexican and Native American heritage, Martinez studied at the Art Center College of Design in Pasadena. This exhibit at the Kickstarter-funded gallery in is ’s first in the .

Public Functionary proves the perfect size for this intimate and thought-provoking collection. The room has been transformed into the landscape of with walls painted the bright colors typical of homes in urban .

What’s immediately striking about ’s art is his velvet hammer subtlety. Neon signs that read “Money Order$ Everything” and “Pawn Your Dreams For A 9-5” demand a double-take and beg the question of what we are, in fact, giving up to satisfy our insatiable need for consumption.

makes these social statements via juxtaposition. The pedestrian nature of the fluorescent signs clashes with the bourgeois elegance of the paintings. In “beer, wine and guns,” a firearm is shoved casually into a fruit bowl next to an unassuming 40-ounce of Olde English 800. What’s disturbing about this piece isn’t the weaponry or the malt liquor—it’s that they don’t look so out of place on the dining room table.

And what of the delicate, fluffy fake cake that features the picture of hardened gangster rapper Tupac? Even the concept of a birthday cake for someone who will celebrate no more birthdays is a morbid statement cloaked in buttercream…and a tempting one at that, were it edible.

Indeed, food is a consistent theme throughout ’s work. “Buy Now Cry Later” begins with “break bread…gluten is not free,” a cheekily-titled still life of baked goods and pastries. Further on, pairs Flaming Hot Cheetos, Wild Berry Skittles, and a Coca-Cola alongside a skull in a piece called “what’s the problem.”

Martinez—who said he’d been treated to Matt’s Jucy Lucy and Monte Carlo’s chicken wings while in town prepping the show—both condemns the nutritional vapidity of these foods while also highlighting their abundance in his art. We know these things are bad for us—just like guns and greed and alcohol—but we can’t stop ourselves from abusing them. These are sad and illuminating truths, not unlike the art itself.

As the exhibit winds to a close around the far side of the gallery, ’s work becomes more abstract. Rather than tidy squares and clean lines, uses shattered acrylic plex with red and black paint violently slapped across its surface. The titles tell grim stories: “domestic violence still life” neighbors “I don’t have the words to express the way I feel, but I do have this bat,” which rests on the floor.

The last piece in the show is a plain black square, outlined in blue neon, hung high on the wall. It’s called “I still don’t want to talk about it.”

Martinez admitted the piece was autobiographical.

“The neon has become very popular, especially online,” said. The artist felt the signs had, well, painted him into a box. “That piece, it’s a step back.”

One senses , who said he enjoyed the opportunity to don a heavy coat and his beanie while in chilly , has plenty more up his sleeve.

“We want to surprise people every time,” Tricia Khutoretsky, the director and curator of Public Functionary, said of the gallery’s mission. They’ve certainly accomplished that this year with their emphasis on culturally diverse installations and out-of-state artists. Khutoretsky hinted that 2014 will bring more local acts to the forefront while ensuring high quality art is accessible to all. They’re also partnering with The Lab to make owning art affordable. Khutoretsky showed off the 5x7 prints of ’s work that will be available for $125 during the show’s run through December 20. As for the rest of ’s pieces, which range from $2,800 to $6,000?

“Everything has its price,” Khutoretsky said with a smile.