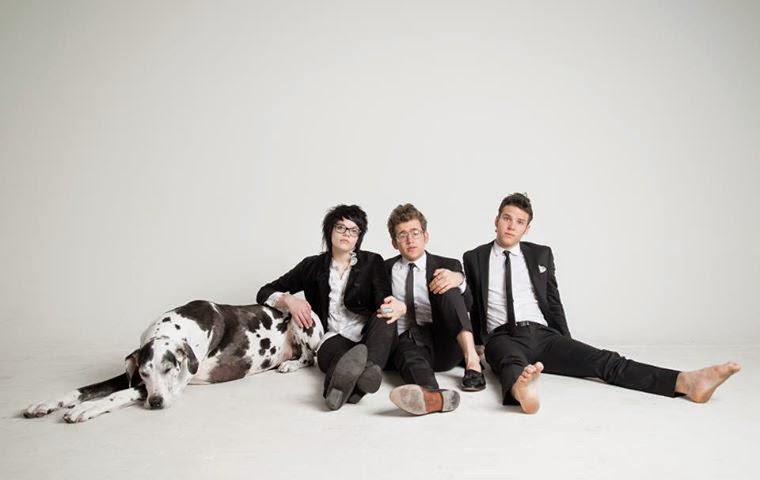 Ben Braden, Nick Sadler, and Sarah Parson are The Lower 48, a band formed in in 2009. Their debut EP Everywhere To Go was followed by a move to and a full-length album Where All Maps End in 2011.

The trio hails from academic, Midwestern families, and approaches music-making Socratic method style. While formerly folky, The Lower 48’s sound recently morphed, due to the influence of ‘60s garage rock—and growing up.

We spoke to 22-year-old frontman Braden in anticipation of The Lower 48’s self-titled album release show at the Triple Rock.

Q: A lot has happened in the past year with you guys!

A: A lot has happened. It’s been an unbelievable amount of unpaid work, countless hours of playing shows and recording. It’s been a blur. We all quit our jobs and have just been doing the band. It’s been a year of poverty but also happiness. It’s the best year yet.

Q: Based on the song “That’s What I’ll Say,” it seems like you’re leaning more towards pop than folk now. What prompted that evolution?

A: It’s a lot more pop-rock-and-roll. It wasn’t intentional. I think it’s because we’re out of the safety net. We’re long gone from . We’re a West coast band now. It leaks into the art you make. The reason it sounds pop-y is because it’s just more polished. We’re becoming, like, real adults. [Laughs] Sort of. Not fully yet. It’s getting there. The product, the outcome, the music that comes out of it is much more honed.

Q: The image of the band has changed, too.

A: We started getting into the suits and it became a contest of who can look slicker. Then we landed a couple of really great licensing deals this year—which is the bread and butter of bands these days for money—so we went out and got some really nice clothes. We wanted to have a classic look—a blank canvas for the music. It fits our new style.

Q: Describe your bandmates. What are their personalities like?

A: Nick has become our showman. He’s probably the most beautiful member of the band and he’s extremely talented at a wide range of things. He plays trumpet, harmonica, drums; he sings perfect harmony. He is fantastic at anything he tries. It’s almost frustrating to be his best friend. He’ll be like, “Let’s play some pool” and he’ll kick my ass right away. He’s a very sweet guy, too. He’s really caring and looks out for everybody.

Sarah is the most mysterious member of the band. She’s got one of the most amazing singing voices I’ve ever heard. She got this fucking unbelievable guitar this year, a ’67 Gibson, an old mama guitar. She’s been wailing on it. People say getting an instrument inspires a different kind of playing and that’s definitely the case with Sarah. She shreds. She doesn’t really know scales or what she’s doing high on the neck but she has such a good ear she never plays a bad note.

She’s the most rock-and-roll of the band. Now that I think about it, she almost pushed the new look and the rock-and-roll harder than anybody else. She started going down that road and we had to catch up.

Q: You’re calling the show at the Triple Rock a “homecoming” yet you’ve said that you don’t consider home anymore. Which is it?

A: I personally don’t feel like is my home but I think our band started there, so [you could] say that about the band.

Q: Is there anything that the music scene has shown you that you weren’t getting in the Twin Cities?


A: To be honest, is way better. People in hopefully won’t read that! The first year in we had a bunch of support right away but it took us a long time to get that in . There were some cold, cold years in terms of support from the scene. There’s just more people who are young and cool-ish and doing art [in ]. There’s a lot of competition. It made us fight through the pack. And I really think we have. We’re doing really well now. It took a while. We’re starting to just surface.

Originally published on Vita.mn in Aug. 2013.