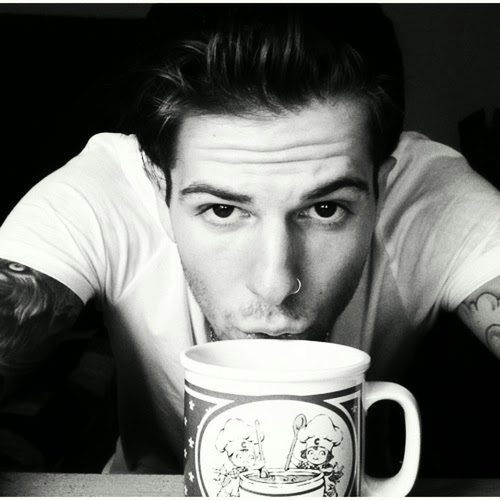 Boy in the Hood
Meet the leader of exploding alt-rock act the Neighbourhood.

Every day has a ‘pinch me’ moment,” Jesse Rutherford, frontman for the Neighbourhood, said by phone during a recent shoe-shopping trip.

Formed in 2011, the Los Angeles-based alternative-rock band has a surprisingly sentimental side beneath their thuggish appearance. After releasing two EPs, “I’m Sorry” and “Thank You,” the monochromatic quintet was signed to Columbia Records and dropped its debut full-length, “I Love You,” in April.

hopes that fans will see beyond his group’s hit single, “Sweater Weather,” which was the first song the band wrote together.

“It set the standard for us,” said of the provocative tune, which climbed to No. 1 on Billboard’s Alternative Songs chart. “We knew we wanted to build on that, because it was catchy and had solid parts. You can hear on the album how our sound got more developed as time went on.”

Despite dark lyrics and edgy instrumentation, the Neighbourhood swiftly seduced radio listeners, resulting in a slew of sold-out shows across the this summer (and Friday’s non-sold-out stop at the Varsity). Already veteran performers of South by Southwest and Coachella, the band also landed gigs opening for top-40 rockers Imagine Dragons on their current tour.

“A couple of nights ago, there was a 5- or 6-year-old in the audience,” said the grateful-sounding , effusively recounting a recent “pinch me” moment. “She was singing every word — not just reciting. Maybe this sounds ridiculous, but she meant it. It felt so good to me. It reminded me of being a boy, because when I was growing up, I always felt different — not like ‘Whoa, I’m an alien,’ but older. I understood emotions and vibes. That little girl reminded me of how a song could affect me.”

The Neighbourhood, whose members are in their early 20s, also appeals to a more mature audience, as evidenced by placement in a (nudity-free!) Playboy app.

“People end up seeing sexual animosity in our music a lot and I don’t necessarily write songs that way,” said. “It just sort of comes out like that.”

Perhaps that’s due to an excess of testosterone? There are five guys in the band, after all.
“No,” said, unequivocally, when that theory was floated.

But what about the tat sleeves and the inked torso? Doesn’t that scream “tough guy”?

“I just got tattoos because I always wanted them as a little boy,” explained. “I have my meanings for them but I don’t care to be known as ‘that guy,’ you know, who’s all, ‘Damn man, I’m tatted up!’ I don’t brag about it.”

And don’t you dare compare to Adam Levine of Maroon 5, though they may share a similar reaction from female fans.

“Yeah, there was a bra [thrown onstage] the other night. It was pretty funny. I grabbed it and threw it back at [drummer] Bryan [Sammis],” said with a chuckle. “Sometimes we jam after a show and it’s incredible, people are real­ly sweet. They make posters and art and stuff. It’s really cool to make people feel that strongly. It’s an inner moment. I feel this childish kind of vibe from getting that reaction.”

Bra flinging aside, there’s no cliché rock-star behavior in the Neighbourhood. The grapefruit-flavored demand on their tour rider is all the proof you need.


“Fresca,” said, naming one of his band’s touring essentials. “And some kind of alcohol. I don’t drink so I don’t pay attention to that. I think it’s ? But Fresca, yeah. We joke that we should change it to something more normal like Sprite. That’s why I don’t feel like there’s too much testosterone in the band. We have Fresca.”