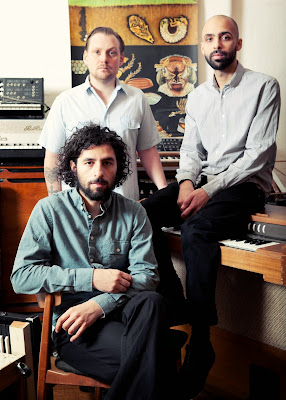 “Are you ready for the next one?”

That’s how José González of Swedish outfit Junip is greeted these days when he answers the phone. Currently on a , , and Canadian tour along with drummer Elias Araya and keyboard player Tobias Winterkorn, 34-year-old González is in full-on publicity mode at the moment.

Born to a Swedish mother and Argentinean father, González has an extensive and eclectic music history. At the age of 14 he began playing acoustic guitar, later venturing into classical guitar, bossa nova, and hardcore rock. Regardless of the genre, González’s pensive lyrics and timeless instrumentation have won him a slew of awards, including a Swedish Grammy for Best Newcomer (in 2004).

Junip was González’s chance to expand on the balladic folk sound he gravitated toward in his solo work. The psychedelic “krautrock” band released their first album, Fields, in 2010. Their eponymous sophomore effort was released in April on Mute Records.

Pitchfork, which rated the album a 7.0, couldn’t help but call the album “motivational speech set to music.” Confessional music this isn’t, as Gonzalez is a notoriously secretive musician.

When asked if any particular decision inspired the first two singles off the album (“Line of Fire” and “Your Life Your Call”), González says, “When I was writing both, I was thinking of transitions, of break-ups, of folks getting ill and dying, of children. My own stuff has not involved that many dramatic decisions.”

González may not be an emotive songwriter, but when he sits down with a guitar, he is methodic.

“I always do it with a song sketch in my mind,” he says. The Junip material is collaboratively written and created in jam sessions; everything else is “always for me.”

Though Swedish is his first language, the vast majority of González’s releases are in English. “I did a recording with a Spanish hip-hop group. I am trying to write in Spanish and in Swedish more,” he says with a sigh. “It is coming along slowly.”

González doesn’t exert creative control over everything, however. The art for the album and the band’s merch are the brainchild of drummer Araya.

“When Elias and I sat down to look at the artwork, I liked the deer. It was cat-like and beautiful. It was shy but at the same time knows what it wants. At first I thought I chose it for aesthetic reasons, but now I see a connection with relationships and growing older.”

González also put the music videos for the album’s first two singles in the hands of filmmaker Mikel Cee Karlsson. The result is a pair of videos that are downright unmooring yet impossible to turn away from. The camera follows a seemingly suburban couple whose middle-aged dysthymia is interrupted by a creepy teenager.

“The videos are Mikel’s own interpretation,” González says. “He took those singles and he created a story that I didn’t even think of when I was writing the songs. It’s fun to see that dark twist. The way he used the still-motion really captures the feeling you get in relationships that have gone on a long time.”

González does not reveal much about his personal life, much less his relationships. The curtain is pulled back briefly in “The Extraordinary Ordinary Life of Jose González,” a documentary about González that combines animation, concert footage, surveillance footage, and video diary. Yet even in his most private moments (brushing his teeth, eating cereal alone, sleeping on a plane), González reveals little about his inner state—though he has no problem waxing poetic about his obsession with photons, color perception, and trichromatic vision.

Indeed, González was working on a Ph.D. in biochemistry when his music career took off.

“I’d like to learn more about science,” he says when asked about his professional aspirations. “The music I’m okay with. I don’t have to work a lot, so the future feels very open for me.”

When questioned, in the spirit of one of his lyrics, “What would you say if you had to leave today?” González laughs.

Originally published on Vita.mn in June 2013.