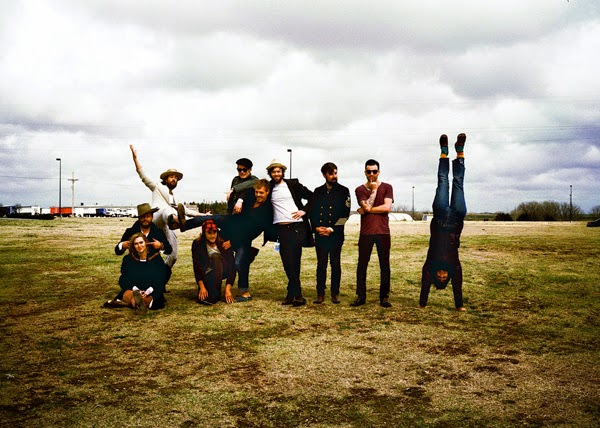 Happy-go-lucky hippies Edward Sharpe and the Magnetic Zeros have hit a high note in their career. Formed in 2007 by frontman Alex Ebert, the band broke onto the indie music scene with their hit “Home.” The sprawling Californian group has released two albums, 2009’s Up From Below and 2012’s Here, on Rough Trade records and has a third, self-titled LP set to drop on July 23rd. The band’s twelve members, currently on yet another epic tour, travel on a Craigslist-sourced bus driven by a rap artist dubbed Corn Fed.

We spoke to guitarist/vocalist Christian Letts, who was with the band from the very beginning.

Q: You’ve known Alex for most of your life. Tell me about your relationship with him and how you two came to be playing music together.

A: I moved from to when we were 3 or 4 and we went to preschool together. We were always drawing together or playing on the same soccer team. We’ve been mates forever; brothers, really.

Six-and-half years ago, Alex got an idea and started working out a record with Jade [Castrinos]. I came over to lay out guitar on “Home” and “40 Day Dream.” We booked a show without having a full band. We had a couple of weeks and started calling all our friends until it became this bigger orchestra.

Q: Tell me about the band’s relationship with your fans. It seems like your shows are more of a shared experience for all rather than a performance. There’s not a “We’re the celebrities and you shall adore us” attitude.

A: Not at all. The biggest thing for us is breaking down that wall. When we do a show, it’s 50-50. Everyone is responsible for creating what the evening is going to be. It’s never been “We’re the band. You guys shut up and watch us.”

Q: Most of your songs are upbeat and have positive messages. Do you ever have days when you just don’t want to go onstage and sing about love and happiness again? If so, how do you get back into an optimistic mindset?

A: Some songs are dark. I think we’ve done well with balancing. There are times when you feel like, “Fuck, man,” because you’re sick or something else is going on in your life that makes you feel like you’re not there. But then you get onstage and by hit one you’re enjoying yourself again. The gratitude brings you back.

Q: For those of us who haven’t had the experience of touring with a band, to what would you compare the dynamic? Summer camp? A blended family?

A: Definitely a family. It’s not worth it if you don’t love everyone, especially since we spend all our time on the fucking bus together. Sometimes I feel like I’m missing out on things, like my mother’s birthday, or being away from my fiancée, but my family is very understanding. Being able to play shows and be part of something positive—I love that. It’s everything all at once.

Q: Do you get much private time on the road with that many people around? Are you ever allowed to have the bus to yourself?

A: No, you can’t have the bus to yourself! We all have bikes, so we use those to take adventures if we need to get away.

Q: Do you feel like you are on a spiritual mission as well as a musical one?

A: Personally, I’m always on that mission and trying to define what spirituality means to me. This band has helped me with that.

Q: What can listeners anticipate for your third album?

A: We are a tricky band to try to describe. We sound like Edward Sharpe and the Magnetic Zeros, which is fucking awesome. Sonically, it’s our biggest album. It’s very rambunctious.

Q: Do you feel your shows are better suited to outdoor venues and festivals as opposed to clubs? Do you have a preference?

A: I think we are good at adapting to either. It is equally great to be playing outside at a festival or to be in a small club of 250 people and be really fucking sweaty.