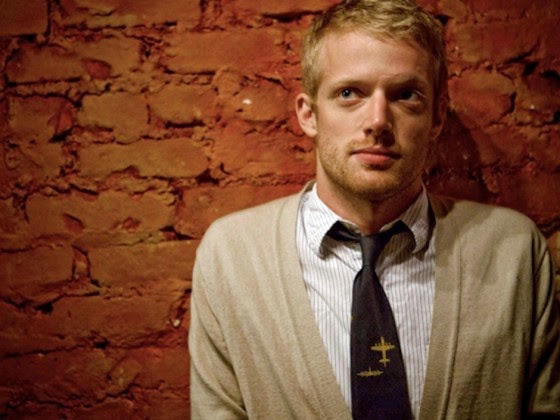 Astronautalis (the artist otherwise known as Andy Bothwell) has a sixteen-year career and four albums thus far. The most recent release, 2011’s This Is Our Science, was praised for its intellectual edginess and elaborate sonic production. Underneath the cerebral slickness of it all, Astronautalis never loses his heart: I know what you dream of, I dream of it too, of roads that are endless and rooms that are huge, he sings on “Measure The Globe.”

Astronautalis’s lyrics read like passionate poetry intertwined with historical fiction; his delivery is unflinching and, at times, unsettling. The rapper’s theatrical past is evident onstage; his oft-sold-out live shows are tightly fine-tuned and include just the right amount of drama.

The 31-year-old intrepid wordsmith is scary smart, equal parts bookworm and bad boy, with street swagger and a freestyle form that is off the hook. Astronautalis has used those skills as an avid collaborator, joining forces with the likes of Bon Iver’s Justin Vernon, Tegan Quin of Tegan & Sara, Culture Cry Wolf, and Marijuana Deathsquads. His next project is The Four Fists with P.O.S.

I spoke to Astronautalis about his legacy, his love for the Twin Cities, and his aspirations for the future.

Erica Rivera: You’re in the midst of your first full-band tour in Europe. How’s it going so far? What has been particularly surprising or exciting for you?

Astronautalis: This whole tour has been exciting. The turn-out has been far beyond our expectations. We had 600 people in Prague.

ER: You seem to be constantly on tour.

A: The past ten years, actually.

ER: Do you get homesick being out on the road for that long?

A: Funny enough, I never got homesick before moving to Minneapolis. I’ve lived in Florida, Texas, and Seattle. I never felt sad leaving those places. I never felt compelled to stay anywhere other than Minneapolis. The more I tour, and the older I get, the more the road wears on me. After this round of touring is done, I’m going to take a break and have the rest of the year off except for some small shows.

ER: You’ve said that you are “really obsessed with melodrama” when it comes to your stage performance. What is your private life as Andy Bothwell like?

A: I’m very low-key when I’m at home. I’m a homebody. I recently moved into my first apartment by myself in my entire life. I’m understated when I’m home. I drink whiskey, ride my bike, read books, spend time with friends. I think it’s overcompensation for the insanity that is the rest of my life.

ER: Your performances clearly require a lot of energy. How do you build up your endurance for these long tours?

A: I’m in reserve battery mode. I spend a lot of time sitting still and try to stay relaxed as much as possible before a show. I’ve been catching naps when I can. And caffeine helps, too.

ER: Do you feel like you’ve “made it” as a musician? If not, how will you know when you’ve made it?

A: I certainly haven’t felt that way. I’ve found myself in a position I never thought I would be in. I have friends in music, both unknown and certifiably famous, and the common link, bottom to top, is that they’re never satisfied. I think that’s a necessary trait in an artist. I’ll finish an album and feel like I’ve achieved something, but my mind is already on the next piece. If I ever feel like I’ve made it, that will mean it’s time for me to try something else. Never feeling satisfied is what keeps artists compulsively creating; it’s also what makes them lose their goddamn minds. It’s a necessary insanity.


ER: You’re a snappy dresser. Do you choose your own clothes? Do you enjoy shopping? How would you describe your fashion sense?

A: I do enjoy shopping and I do pick out all of my own clothes. A few years ago, I decided I wanted to dress nicer. On tour, it’s easier to wear T-shirt, jeans, and tennis shoes, but all those disposable clothes felt wasteful. It was silly that I’d burn through so many crappy clothes. I’d rather spend more and buy something that I’ll keep forever. It’s a focused effort. I try to stay with classical styles rather than go chasing trends.

ER: Science seems to be a fascination of yours, at least as far as the title of your last album and your rapper name.

A: There’s no connection between the two. I got Astronautalis when I was 15. I just wanted something cool for my rapper name and I’m still stuck with it. The concept for the last record was comparing and contrasting scientific developments with artistic development.

ER: Collaboration seems to be a big part of hip-hop. Is there anyone you’re hoping to collaborate with in the future, either locally or beyond?

A: I’ve been daydreaming about collaborating with Dr. John. [Laughs] I have no reason to believe that will happen at any point in the future.

ER: What are your top three Twin Cities haunts?

A: Muddy Waters is my bar of choice. It’s my home away from home. I also like The Anchor in Northeast. And, now that the weather is getting nicer, there’s a train bridge over Nicollet Island where I like to read and listen to the trains go by.