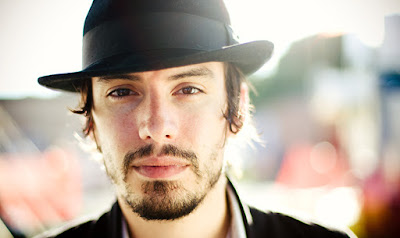 Raised in Appleton, Wisconsin by a Baptist minister father and a piano-teacher mother, it’s easy to see why themes of faith, death, desire and redemption circulate through Cory Chisel’s music. His handcrafted blend of Americana, folk, and gospel sounds create a spellbinding sensation for listeners, evoke haunting, pastoral scenes, and make for a memorably intimate live show.

Chisel’s full-length debut, 2009’s Death Won’t Send A Letter, was produced by Grammy-winning Joe Chiccarelli (The Shins, White Stripes) and featured members of Band of Horses, My Morning Jacket, and the Raconteurs. The album was described as a “dark and urgent rock and roll vision” and led to collaborations with the likes of Brendan Benson and Jack White.

Chisel’s right-hand woman is Adriel Denae, the angelic vocalist who accompanies him on recordings and in performance. Together, Chisel and Denae are gearing up to tour with Norah Jones this summer. I spoke to Chisel in anticipation of the June 26 release of the new Cory Chisel and the Wandering Sons album, Old Believers, and the band's upcoming appearance at the Turf Club on June 28.

Most interviews with you begin by mentioning that your father is a Baptist minister and asking about your spirituality.

So my question is: are your childhood experiences still influencing your music today or do you have a set of beliefs that are unique to you?

CC: My beliefs have grown stronger and stronger and farther and farther away from what I learned as a child. I draw inspiration from all types of spirituality, but I’m just as influenced by gospel, blues, and R&B. People enjoy my music regardless of what their spiritual beliefs are or what God they believe in.

Does the title of your new album refer to anyone in particular?

CC: It does. It’s a reference to a type of person, but I don’t mean “old” as in outdated and archaic. “Old Believers” is a phrase I came across in a book; it’s a reference to the Orthodox and the people who rejected the constraints of the church, but that’s not the way I’m using it in the album title. I’m thinking of it as a guy who’s been down for a long time, but is still a steadfast human being, a journeyman. It’s the type of person who is interested in growing. It’s almost a religion unto itself. I know a lot of people like that.

Nature seems to be a critical part of your songwriting. How do you stay connected to nature when you’re on the road?

CC: It’s a big struggle. There’s a lot of fucking concrete between here and the Coast. I guess that’s why I put nature in my songs; that’s how I pack it up and take it with me. I feel most at home in the woods. I feel like my real self when I’m there. The difficulty is to find that in a place like New York City. Unless you can curl up inside a song.

How did you come to partner with Adriel?

CC: We met when we were younger--25 years old--at a show I went to in support of a friend who had passed away. That night was already a heightened experience because of the emotions about this person and the celebration of his life, and then Adriel walked in with the band she was playing in at the time. When she started singing, that was it. I was over the moon. I knew I had to do whatever it took to work with her.

Does she do any of the songwriting?

CC: She does. It’s definitely a collaboration. Her role is also being the main source I run every song by. She’s my first audience.

Yet her name isn’t in the band title. Is that intentional?

CC: Adriel came into the Wandering Sons when it was already formed, but our relationship has become a collaboration. She has been my most consistent wandering son. She’s also working on some songs that she’ll release on her own, so she’s saving her name for when the time is right for her music. When that happens, I’ll be her wandering son.

You once did an ad for Lucky Brand Jeans. If you were to ever endorse a product again, what would it be?

CC: That’s a tricky question, because I only endorse things that have a soulful approach. When Lucky came to me the first time, I needed to make money just to stay alive. The reason why I was interested, though, was because they wanted to partner with us as artists. It wasn’t about modeling. It was a mutually beneficial arrangement. My record label wasn’t going to put my name on a billboard on Sunset Boulevard, but Lucky was. And they were going to talk about my music. If I were to do something like that again, it’d probably be for something I use every day…like wine.

Perusing your Facebook page, it looks like hats and painting are some of your other favorite things.

CC: I’ve always had a fascination with my grandfather’s era. The men always looked sharp—you know, unless it was late at night—but it stood out in my brain that men wear hats. They were fancy, and that’s right up my alley.

And paintings…I just really love them. If I had a dozen or so lifetimes, I would get into painting from an early age. I draw more inspiration artistically from paintings than I do from music.

And wine…I’m just really interested in how it’s made. It also helps with self-consciousness.

Your hometown, Appleton, is known for its cover bands. Can you speak more to what the music scene is like there?

CC: It’s changed a lot; whether or not we had anything to do with that, I don’t know. Initially, no one started a band in Appleton to go anywhere; it was mostly out of boredom. Appleton is a completely agreeable place, so if you were feeling disenfranchised, your choices were: break the law or break shit or rock n’ roll.

There were no venues for original music then, so the only places you could play were things like German Fest, and they wanted a certain kind of music. That’s where the cover band thing started. It’s like a get-together in a house; rather than play a song you just wrote, you and your friends would rather sing a rendition of an Elton John song. It wasn’t intrinsically sad, but I wanted to focus on new ideas, not revel in party music.

If you were to cover a rap song, what would it be?

CC: That’s a good question. I really like Wu-Tang Clan and Ol’ Dirty Bastard. He has a song called “I Like It Raw” that I’d like to cover. If I were to do it more seriously, maybe something by The Roots.

What are some of the places that you like to visit when you are in the Twin Cities?

CC: I lived in Minneapolis for a while, actually. It’s one of my favorite places. There is every type of pleasure to be indulged. I’ve gone to grimy shows at the 400 Bar to some of the best shows of my life at First Ave. I went down to the new Twins stadium; that was fun. And Minneapolis has great record shops, of course.

Where do you envision yourself in 50 years? Do you think you’ll still be doing the same thing?

CC: Still doing the same thing, but hopefully with a little more swagger.  [Laughs.]  My dream would be to have a little place everywhere. I had a house in Wisconsin and discovered that wasn’t really for me. Now I have a one-bedroom in Nashville. I could see myself traveling to Europe, having a place in Scotland. If I really put my money where I wanted to, I would just live free. Spend time on the Iron Range—my family is all from Minnesota and still lives there—so a cabin on the lake would be nice. I guess I’ll have to sell more records or rob banks to make that happen.

Originally published on the Live From Studio 5! Blog in June 2012.