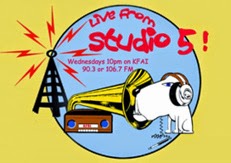 Erica Rivera has been invited to join Live From Studio 5, a weekly radio program at KFAI. Rivera was first introduced to the station in 2009, when she was interviewed there about her memoir Insatiable. Rivera also booked and accompanied Twin Cities indie band Pictures of Then for an in-studio session in 2010. Now Erica will be recruiting local talent for future shows and conducting interviews with musicians on-air. Details on other KFAI segments forthcoming!

Live From Studio 5 airs on Wednesday nights from 10 PM to Midnight. You can stream the program at www.kfai.org.